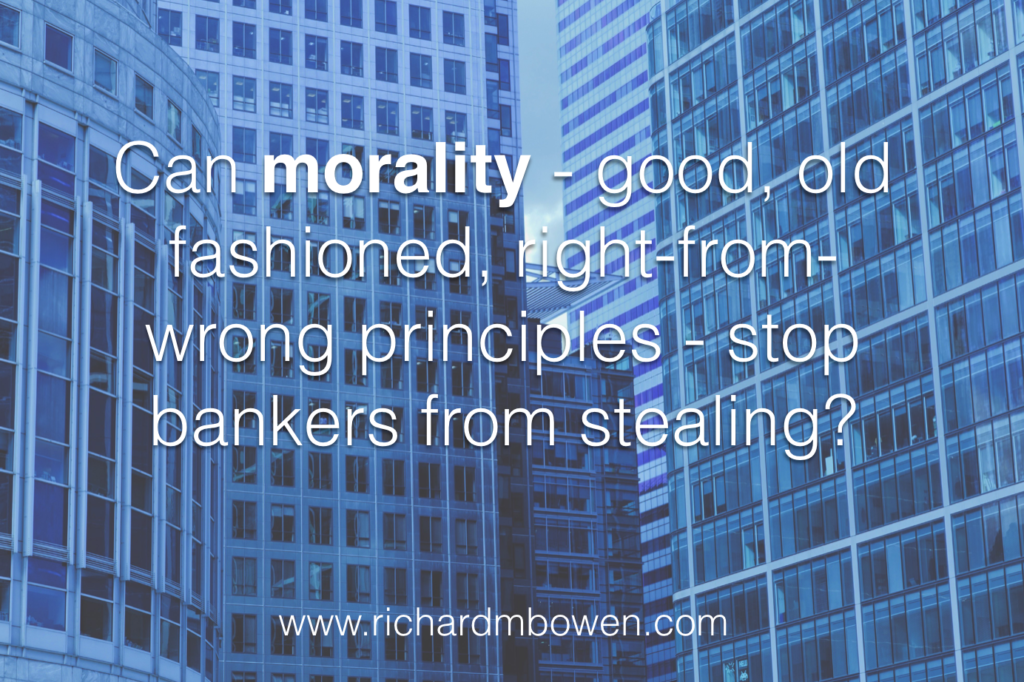 Several articles came across my desk this week. I found one especially intriguing, as it fits my frame of reference. It is a post by Ms. Yves Smith, commenting on an article “Can Philosophy Stop Bankers From Stealing?” by Lynn Parramore, a senior research analyst at the Institute for New Economic Thinking.

Smith argues that the title might more appropriately be called, “Can Morality Stop Bankers from Stealing?” She comments that:

“it seems impossible to go from the openly corrupt world in which we live now to one that values reputation, probity, and fair dealing. Yet dramatic swings in values can happen in a generation, or even less.”

She says, “the first step, as this article indicates, is to start calling things by their proper names. And there is now much less inhibition about calling out predatory conduct and using words like “fraud”, “stealing,” and “corruption.”” Smith believes that it’s important to recall that the shift in social norms to our current weird idea that markets are more important than communities or social relationships did not just happen. She applauds “calling out predatory conduct and says it’s about time we called theft, theft.”

In Parramore’s post, she states, “Pernicious cultural norms inside American banks and regulatory agencies have crowded out fundamental moral principles”… “Does the question of morality have a place in the realm of banking and regulation? That it feels awkward to even raise the issue is convenient for bankers who engage in reckless and harmful activities every day without fear of punishment.”

She proposes that Ed Kane, Professor of Finance at Brown College, has an antidote. Parramore states:

“Ed Kane believes it’s vital to discuss moral questions, in plain English, without abstractions. Following his own advice, he is blunt in characterizing some of the behavior in the banking industry in recent years: “Theft is a forced taking of other people’s resources,” he says. ‘That’s what’s going on here.” Kane urges a deep inquiry into our culture to understand why bankers so commonly get away with crimes in the United States.”

One of his examples of banker’s gone rogue is Goldman Sachs chief, Lloyd Blankfein selling the bank’s toxic junk to unwitting investors who were assured they were solid.

Still, Blankfein and his fellow bankers later pocketed billions of dollars from the American people in the form of a bailout. They profited at the expense of their clients and society. Nobody went to jail.”

Kane believes the word should needs to be part of a banker’s vocabulary. Asking what one can get away with is not the same as is it right to do it?!

Taking his work further, in another paper for the Institute for New Economic Thinking, ”Ethics vs. Ethos in US and UK Megabanking”, Kane argues:

“that when bankers make reckless and harmful choices while counting on unlimited taxpayer support to bail them out, they are plainly stealing. He calls it “theft by safety net.” Through the safety net, Kane explains, big banks demand that the public provide protection and relief from distress. They put great pressure on the government, which acts as a middleman in the robbery, just as in a “protection racket.” As Kane puts it, “the government then, by dint of its authority, takes the money from hapless taxpayers.” (Parramore)

Why is this not considered a crime? Kane explains: “Because, politicians nearly everywhere are bought off by bankers. Plain and simple. The regulators who might intervene are more worried about their careers and hopping through the revolving door between government and the industry.”

No surprise there! In prior posts I wrote  about  the work of Dan Ariely, PhD, a professor of psychology and behavioral economics at Duke University.  Dr. Ariely, the author of several books, including, The Honest Truth About Dishonesty — How We Lie to Everyone, Especially Ourselves was the focus of a recent documentary, (Dis)Honesty. The documentary is a thought provoking look at why we lie.

One of the questions the  documentary asked  was, who lies more , politicians or bankers? The bankers “won” hands down. And in prior posts I have written about studies which have shown that, in fact, employees of banks may cheat more than employees of other organizations and about who lies more – bankers or politicians.

Still, it’s disheartening. The documentary, (Dis)Honesty pointed out what I have been saying for some time: dishonesty costs society.

Incidentally , Dr. Ariely’s multiple TED talks have been viewed by millions and are well worth the  time.

“In Kane’s view, pernicious cultural norms within banks and regulatory agencies have crowded out fundamental moral principles. Regulators in both the U.S. and the U.K. are fully aware that the reckless pursuit of profits is one of the main reasons for the expanding scale and frequency of financial crises over the last 50 years, but they tend to approach the issue differently.” (Parramore)

Surprise! Apparently the issues are much worse in the U.S!

“The regulators in the U.S. just don’t see things ethically…In the U.S., Dodd-Frank Act allows a limited clawback of stock-based bonuses in the wake of a bank failure, but it does not make individual bankers criminally responsible for actions that they should have known were reckless. Prosecutors typically settle lawsuits and bankers find ways to put taxpayers on the hook. …

A code of ethics, says Kane, is what connects us. As Kane sees it, holding accountable the individual, rather than the corporation, is hugely important to dealing with crimes in the banking industry. “Individuals are the ones who act recklessly,” he points out. “Banks don’t act recklessly.” The punishment of the individual is not a matter or revenge of retribution, it is about deterrence. …

Kane believes changes are needed in the culture of banks and regulatory agencies, but of course by the time people enter jobs in those institutions, they are already well into adulthood and their ethical frameworks have already taken shape. Is it too late?” (Parramore)

So where do we start? Teaching values at home. Children need to be disciplined. They need to learn right from wrong .They need to learn about their obligations to others, not just what they believe is due them. Schools need to teach operative ethics, not just philosophical case studies.

“Kane believes that students need to be taken through numerous real life scenarios in which they can apply ethical principles. … When your bank holds toxic mortgages, what should you do? What does the Golden Rule indicate as a course of action?”

In the Ethics vs. Ethos in US and UK Megabanking paper, Kane suggests we implement:

(1) a formal recognition of the fiduciary duties that TBTF firms owe to taxpayers, and

“In banking, professional standards of conduct derive less from fundamental moral principles (i.e., individual ethics) than from the pragmatic character of slowly evolving norms of banking and regulatory cultures (Kane, 2016). Realistically, the world’s top bankers wrestle every day with three practical issues that leave little or no room for high-minded concepts of right and wrong:

1. What is profitable for our firm to do?

2. What will our regulators let us get away with?

3. How can we defend and expand these profit-making opportunities?

His paper argues that each of these questions can be improved by replacing the first verb by the word “should:”

1. What should our firm do?

2. What should our regulators let us get away with?

3. How should we defend and expand our profit-making opportunities?

Using “should” in its dutiful sense moves us from the theorem-rich realm of positive economics to the mushy sphere of normative analysis. Kane’s reason for doing this is to improve our understanding of why financial crises have become increasingly deep and widespread during the last 50 years.

The gentlest way to express the explanation I put forward is to say that, especially at megabanks, bank managers have been allowed to violate repeatedly two duties they owe the citizenry at large. The first comes from the Kantian imperative against using others (here, taxpayers) only as a means. The second is to use their knowledge, skill, and experience to guard against the consequences of reckless actions. Finally, regulators’ propensity to rescue insolvent mega bankers and their creditors has lessened their incentive to perform these duties by relieving them from suffering the consequences of their recklessness in full.”

Ethics requires thought. We have lost a great deal by promoting what feels right at the moment. So can morality – good, old fashioned, right-from-wrong principles – stop bankers from stealing?

Who Lies More: Politicians, Bankers, or You?
Chicken Little was right – “the sky IS falling”!
Silence is Deadly. Lessons Learned.

My Few Minutes of Fame - A PBS Miniseries on Business Ethics
Brexit: A Call for Democracy or an Act of Economic Shortsightedness?
Ethics on your mind? Subscribe to my ezine to get my latest article delivered right to your inbox. Click Here to Subscribe