Perhaps, finally the hue and cry to prosecute those responsible for the 2008 financial crisis is having an impact. It looks as if the Department of Justice is changing its tune. This last Wednesday, the DOJ announced a new policy to go after the individuals who have committed financial crimes.

Deputy Attorney General Sally Yates outlined the new approach in a speech at NYU law school. The DOJ will now pursue criminals “regardless of whether they commit their crimes on the street corner or in the boardroom,” she said. “A crime’s a crime.”

Maybe I’m just being cynical, but I’ll believe it when I see it. My peers have much the same view. Just the day before the announcement was made, Michael Winston, author of World–Class Performance: The Commitment; The Pursuit; The Achievement, commented in the Huffington Post and recounted the DOJ’s frequent changes in position. He said that they throw up “a smokescreen activated every six months or so to create the illusion of law enforcement.” He nailed it and basically predicted what the DOJ would do the very next day!

I expressed that cynicism when I was recently interviewed by Avi Asher-Schapiro of Vice News for the article “Is the Government Pursuit of Wall Street Criminals Too Little Too Late?” I stated that “it’s my belief that the new DOJ stance is a defensive smokescreen to shield itself from widespread criticism.” I further stated that I tend to think this is a public relations ploy and that “By now, all of this is a moot point.”

We need to keep in mind  that in  the last six plus years,  49 financial institutions have paid out nearly $190 billion in fines and settlements, yet only one banker, a mid-level trader at Credit Suisse, has received any jail time for activities linked to mortgage fraud.

Still, the DOJ, is heralding the policy as a new day for corporate accountability. Laying out the details in a memo addressed to the entire Department of Justice staff, Ms. Yates argued that, “one of the most effective ways to combat corporate misconduct is by seeking accountability from the individuals who perpetrated the wrongdoing.”

She directed attorneys to play hardball with corporations, and to pursue individual executives from the outset of any investigation. The DOJ should not, she said, offer to drop criminal charges against executives in exchange for cooperation.

“Corporations can only commit crimes through flesh-and-blood people,” she told the New York Times on Wednesday. “It’s only fair that the people who are responsible for committing those crimes be held accountable.”

In a recent article in New Economic Perspectives, William K. Black, a former federal regulator responsible for many of the prosecutions of banking executives coming out of the 80’s financial crisis, says:

Words are cheap. The Department is 4,000 days late and $24.3 trillion short. Economists’ best estimate is that the financial crisis will cause that massive a loss in U.S. GDP — plus roughly 15 million jobs lost or not created.

By issuing its new memorandum the Justice Department is tacitly admitting that its experiment in refusing to prosecute the senior bankers that led the fraud epidemics that caused our economic crisis failed. The result was the death of accountability, of justice, and of deterrence. The result was a wave of recidivism in which elite bankers continued to defraud the public after promising to cease their crimes…

The Bush and Obama administrations have not convicted a single senior bank officer for leading the fraud epidemics that triggered the crisis…  The Obama administration and the Department have failed to take the most basic steps essential to prosecute elite bankers. They have not restored the “criminal referral coordinators” at the banking regulatory agencies and they have virtually ignored the whistleblowers who gave them cases against the top bankers on a platinum platter.

The Department has not even trained its attorneys and the FBI to understand, detect, investigate, and prosecute the “accounting control frauds” that caused the financial crisis. The restoration of the rule of law that the new policy promises will not happen in more than a token number of cases against senior bankers until these basic steps are taken.

We have known for decades that repealing the rule of law for elite white-collar criminals and relying on corporate fines always produces abject failure and massive corporate fraud. We must not simply prosecute the current banksters, but also prevent and limit future fraud epidemics through regulatory and supervisory changes. 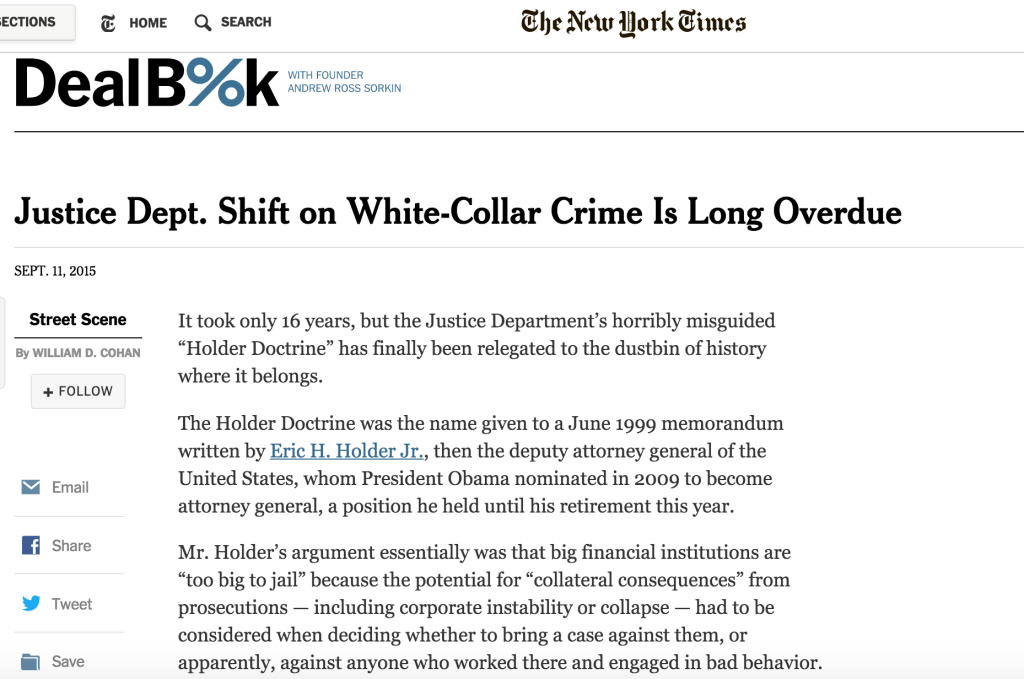 William D. Cohan, a former senior mergers and acquisitions banker who has written three books about Wall Street, notes in the New York Times other considerations that need to be taken into account as it relates to the new DOJ policy:

It took only 16 years, but the Justice Department’s horribly misguided “Holder Doctrine” has finally been relegated to the dustbin of history where it belongs.

Mr. Holder’s argument essentially was that big financial institutions are “too big to jail” because the potential for “collateral consequences” from prosecutions — including corporate instability or collapse — had to be considered when deciding whether to bring a case against them, or apparently, against anyone who worked there and engaged in bad behavior.

The Holder Doctrine, and its acolytes within the Justice Department, is most likely the reason there have been no criminal prosecutions of any of the Wall Street companies that brought us the 2008 financial crisis. It is also why not a single individual at a Wall Street company, or other financial institution, who engaged in fraudulent behavior in the years leading up the financial crisis, has been prosecuted successfully.

Cohan points out that Mr. Holder’s Justice Department did not prosecute executives, but was focused on getting huge fines and settlements from Wall Street firms, and then bragging about it:

This was a form of extortion. In exchange for paying these fines – with their shareholders’ money – Wall Street companies got the government to agree to keep what they really did wrong under wraps forever… We may never know the extent of what individuals on Wall Street did to deceive their clients, their investors and their customers.

Cohan further notes that, perhaps under this new policy, “No longer will it be possible — theoretically — for Wall Street companies to cut deals with the Justice Department that allow individual wrongdoing to be swept under the rug of a financial settlement.”

Mr. Black says, “If the Department wants to restore the rule of law I am happy to help it do so.”

I’ve called for a full blown Congressional investigation into the coverups and lack of DOJ action. My colleagues, Cohan, Winston and others are also demanding justice.

Let’s see. Maybe this new policy is not a smokescreen. It’s about time the con game stops.

How Bankers Avoid the Slammer

A Test Case for the DOJ’s New Policy?
All This Misbehavior, and No One Is Guilty!
Ethics on your mind? Subscribe to my ezine to get my latest article delivered right to your inbox. Click Here to Subscribe