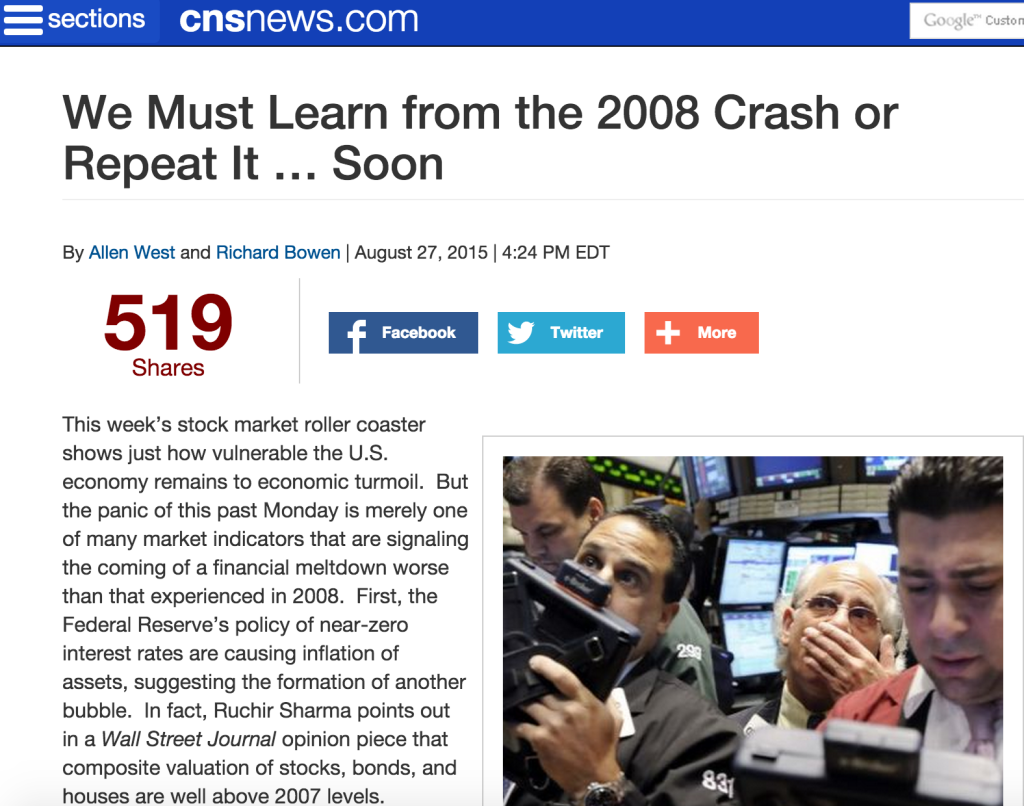 The National Center for Policy Analysis (NCPA) Financial Crisis Initiative is accumulating talent from scholars and practitioners nationwide to research and come to consensus on two central questions of 2008:

What were the major causes of the financial crisis?

What policies can and should be implemented to prevent a reoccurrence?

To answer these questions, the NCPA has gathered a team of experts who will focus their attention on how government policy and financial service firms may have interacted. I’m honored to be part of this initiative, contributing my direct experiences with Citigroup and the Financial Crisis Inquiry Commission, among others.

This week, an op-ed that Allen West, President and CEO of NCPA and I co-authored, as part of that initiative,  appeared in CNS News. It appears we have not learned from the 2008 debacle and are once again getting entrapped in the same old maelstrom that led to 2008.

We Must Learn From the 2008 Crash or Repeat It…Soon by Richard M. Bowen & Allen West*

This week’s stock market roller coaster shows just how vulnerable the U.S. economy remains to economic turmoil.  But the panic of this past Monday is merely one of many market indicators that are signaling the coming of a financial meltdown worse than that experienced in 2008.  First, the Federal Reserve’s policy of near-zero interest rates are causing inflation of assets, suggesting the formation of another bubble.  In fact, Ruchir Sharma points out in a Wall Street Journal opinion piece that composite valuation of stocks, bonds, and houses are well above 2007 levels.

Household debt has also returned to pre-crisis levels.  According to the New York Fed, total debt is once again approaching $12 trillion, a number not seen since 2007.  More startling, Equifax credit agency data shows that more than one third of all credit, auto, and personal loans went to subprime borrowers during the first four months of 2015.  This is a proven recipe for disaster.  Indeed, experts agree that the large concentration of debt in the hands of subprime borrowers caused the 2008 financial crisis.

Meanwhile, big banks are getting bigger and community banks are disappearing.  Major financial institutions have used powerful lobbyists on Capitol Hill to effectively gut Dodd-Frank of the very regulations intended to rein in their power.  And the top three banks have grown by 80 percent since 2007.  The top ten banks own 72 percent of the total banking assets in the entire country.  The ill-conceived and burdensome regulations remaining in Dodd-Frank now fall disproportionately on the shoulders of smaller banks.  Community banks now share a tiny percent of the banking assets in the country.  The number of small institutions has dwindled to below 7,000 (there were over 18,000 in 1984).  And now Dodd-Frank is further decimating the community banking industry, which primarily funds small businesses – the life blood of the U.S. economy.

A far more important sign of impending financial crisis exists, though.  The U.S. government and the Department of Justice are welcoming more financial malpractice by not prosecuting anyone for substantial wrongdoing in the 2008 crisis.  The savings-and-loans crisis of the 1980s caused a $1.8 trillion loss and resulted in over 1,000 criminal prosecutions.  In comparison, the 2008 meltdown was 8-times worse, generating a loss of $14 trillion, but the government has failed to prosecute any major banking officials.  The DOJ under Attorney General Eric Holder chose to exact settlements from large financial institutions in place of criminal charges – and the beneficiaries of these settlements are questionable and controversial.  The new Attorney General, Loretta Lynch, has not addressed the issue.  The federal government has essentially rewarded bad behavior and convinced observers that no jail time awaits those who engage in wrongdoing.

The U.S. government claims their investigations could not find concrete evidence of misbehavior.  This could not be farther from the truth – one of us know this for certain.  I, Richard Bowen, saw the evidence first-hand while working as a Senior Vice President for Underwriting at Citigroup.  I testified in April 2010in front of the Financial Crisis Inquiry Commission about the observed activity.  But in a startling turn of events, the commission forced me to change my written testimony, editing out much of the damning evidence, with some at the DOJ saying they never received the evidence a legal requirement of the commission.  The commission then locked up my original testimony in a blatant example of complicity between government agencies and big banks.  A New York Times op-ed exposed much of this activity in 2013.  Since then, both House and Senate finance committees have ignored repeated written requests for investigations into this blatant cover-up and violation of public trust.

This supposed bipartisan commission, put together while Democrats controlled both chambers, failed in their duties.  The commission ignored the mounting evidence of financial wrongdoing and apparently did not pass the evidence on to the DOJ.  Leaders in Congress would be wise to start inquiries into the situation.

In light of these circumstances, we are demanding a congressional investigation into what appears to be a cover-up at the commission and the subsequent complicity between banks and government officials.  The U.S. government must prove once and for all that it does not reward bad behavior.  Those on Capitol Hill must demonstrate that no one is above the law.  If not, the American public can expect to see greater malpractice, leading to another, far worse financial crisis.

We are concerned, as should we all be, that our stock market roller coaster rides, higher levels of household debt, lack of individual banker prosecutions, big banks getting even bigger, and more, don’t bode well for a healthy economy.

The Financial Crisis Initiative will pay particular attention to how a lack of ethics and transparency contributed to the 2008 financial meltdown. It will also review past and subsequent legislative and regulatory policies to test their efficacy and value. Research studies, articles, videos and other means will culminate in two major summits in the spring of 2016, one to be held in Dallas and the other in Washington D.C.

Part of the Initiative’s goal is to foster communicating and advocating sound economic policies which should lead to the prevention or mitigation of future crises such as those we recently experienced here and which were exported worldwide.

I applaud NCPA’s initiative. We need more like it in order to resolve the issues we are faced with today, in business, economically and ethically, before we become morally and financially bankrupt.

*Allen West is President/CEO of the National Center for Policy Analysis and a retired Army Lieutenant Colonel.  He served on the House Committee on Small Business in the 112th Congress as a Representative from the 22nd district of Florida.

All This Misbehavior, and No One Is Guilty!
Is Dodd-Frank the Real Culprit Today? -- YES!
Ethics on your mind? Subscribe to my ezine to get my latest article delivered right to your inbox. Click Here to Subscribe